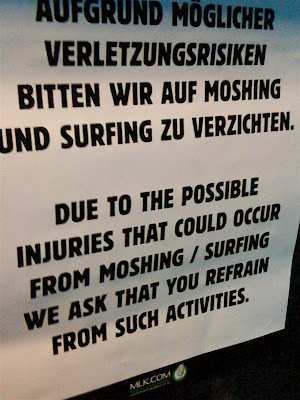 People, something strange is goin on here. I remember waves of stagedivers, rumbling moshpits and screaming airguitars, going to Metal shows in the 90s and Noughties. But now, a new decade and people telling me, that's an unhealthy behaviour? WTF!!!? I did this photo on last weekend's AIRBOURNE show at Huxleys, Berlin. I mean, AIRBOURNE are a Fun Metal band, I wouldn't say AC/DC clones but everybody around us was broadly grinning with the riffing beginning of each song. I'm sure, the Young brothers don't but what else should happen at an AIRBOURNE show? The biggest danger was Joel O'Keeffe, climbing and jumping all over the venue. Big fun. However, it felt like yesterday and in that mood, I had to put up a new discoid BOMBCAST for your pleasure. Some wacky old and tacky new stuff included. Dig in: